G.M. Philip Gelinas (born in 1952) is an accomplished Martial Arts

practitioner who lives in Montreal, Quebec. He owns and runs the

Cultural Martial Arts Academy. He is one of the dog Brothers as well

at the age of 14. Since then he has trained in many styles including

a Mauy Thai instructor credential under  Tom Harinck after meeting

Gelinas is an 8th degree black belt in the Emperado Method of Kajukenbo, He received his promotion from Sijo Adriano Directo Emperado, one of the original creators of the art, in 2001. 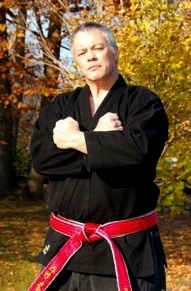 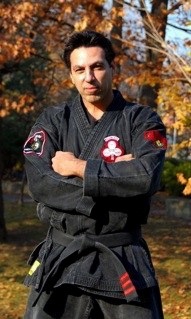 Dorian Sherwood is a perfect expression of what Kajukenbo

is all about, body, mind, and spirit, He represents agility, audacity,

and toughness. This Dynamic athlete has been training for many

years in order to master the art of fighting.

He brings as much soul and passion to fighting as he does to the entertainment business being the star of various shows such as, Motown and Night Fever where he performs as a lead singer and dancer. Worked with Lara Fabien, Rock Voisine, Corey Hart and Robert Palmer to name a few. Written songs for Luba.

This dancing singing and fighting machine knows the difference between reality and fantasy and is able to bring it into the Multi Man Defense by pushing the limit to the extreme. 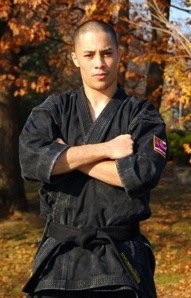 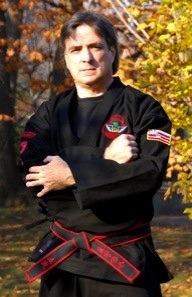 then various Kung Fu styles in Montreal Chinatown. Even though he has studied various styles,

he main orientation remained streetwise defence, that’s why when he discovered Kajukenbo he found himself at home.

Among the titles that he has deserved he is he certified Mauy Thai Instructor class “B” from Holland.

Being the sparing partner of several well know boxing champions

such as famous MACETON CABRERA, Mexico,

But his main orientation remains the street self defense and he specializes in Multi Man Defense,

a Chuan fa Kajukenbo branch, using his body like a machine gun with rapid firing

In Mexico he was strongly influenced by one the Mexican saying about multi man attacks,

(meaning that they are not much they’re many).

the art of Kajukenbo

He began his martial arts journey at a very young age and has studied a variety of martial arts systems including Karate, Choy Lee Fut Gung Fu, Jeet Kune Do, Capoeira, Chen Style Tai Chi and is also involved in Pekiti-Tirsia Kali with Tuhon Philip Gelinas.

This prodigious black belt “Mozart in Motion” has learned the essence of the fighting arts, his agility and great capacity to learn has also brought him to be a 2nd generation member and former leader of the popular Montreal based breakdance crew, 701 Squad.

When he is not training Mitchell also makes a living working in Private Security and as a Stuntman for film and television appearing on such shows as YTV’s “Prank Patrol” and such films as “Immortals” and “The Mortal Instruments”. He has also acted as a support element for several military exercises and has advised several members of the Canadian Armed Forces on unarmed combat and personal defense (CQB).

After a long and hard road in the study of Kajukenbo, he has attained the rank of Sifu, third-degree black belt in the Chu'an Fa and Emperado Methods under Grand Master Philip Gelinas. Mitchell is committed to the practice and teaching of Kajukenbo and continues to expand his knowledge of the arts.